Eagle is credited with being the
‘father’ of Mothers' Day

It was while Frank Hering was a young professor of history at Notre Dame University that he had the idea for which he is remembered as the "Father of Mothers Day."

One day in l902, Frank happened to step into the class room of a Universily priest, where the instructor was passing out penny postcards to the students. Each boy took a card, addressed it, turned it over and began to write. What are they writing?” Hering asked. The class instructor smiled. “Anything at all, as long as its to their Mother. We do this once a mnnth in this class, one day a month is Mothers’ Day." Mothers Day. That's a familiar phrase today, but in 1902, nobody ever heard it. Except a priest, a few students and Frank Hering.

Months passed and Frank began to realize this was a good idea. He decided something should be done about it. What ways could he find to circulate the idea, to give it legs, or, better yet, wings? There was the University, of course, but This was not big enough to reach everyone. He was, however, a member of another organization That was nation-wide. He had just recently become a charter member of the South Bend, Indiana, Fraternal Order of Eagles. And so, on Feb. 7, 1904 Frank Hering stood up at the English’s Opera House. in Indianapolis, Ind., and talked about setting aside one day a year to honor mothers and motherhood. The address he made remains famous. Those in attendance sensed they had taken part in a historic event, the first-known public plea for the establishment of a nation-wide Mothers Day.

The Fraternal Order of Eagles took up the crusade. The idea spread rapidly and gripped the hearts and imagination of people from everywalk of life. All across the nation, Eagles clubs began to set aside a day to honor mothers and motherhood.

In 1907, Miss Ann Jarvis of Philadelphia began campaigning for a Mothers Day. She chose the second Sunday of May as a tribute to her own mother, who had passed away on that day. It occurred to her this would be in the season of blue skies and blossoms. Springtime would be a great time to annually honor Mothers’ Day.

In 1912, the Eagles internationally passed a statute calling for observance of Mothers Day by every Eagles Club (Aerie). Two years later, Congress sent a resolution to the President of the United States, which stated in part: “whereby the President of the U.S. should, through annual proclamation, name the second Sunday in May as Mothers’ Day."

On May 10, 1914, President Woodrow Wilson issued that proclamation. The ideal which had advanced from Indianapolis just 10 years earlier had become a reality.

Public tribute to Frank Hering and the Eagles was far—reaching. In 1925, the American War Mothers invited Hering to give the keynote address for the Mothers Day services at the Tomb of the Unknown Soldier. In 1929, they gave him their highest honor, the famous Victory Medal, which bore the inscription "Father of Mothers' Day." In 1930, a radio talk given by Senator Clarence Dill, of the State of Washington, was read into the congressional record. It stated, in part. "the American people owe Mr. Hering and this great fraternity a debt of gratitude which can only be repaid by renewed reverence for mother.

As we look back it is hard to understand there once was a time when Motherss' Day was a dream conceived by one, and achieved by all of us, thanks to the Fraternal Order of Eagles.

Writer is unknown
This article was found in the Picayune, Marble Falls, Texas on May 5, 1999 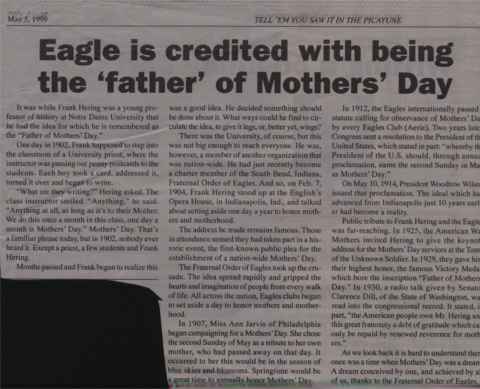