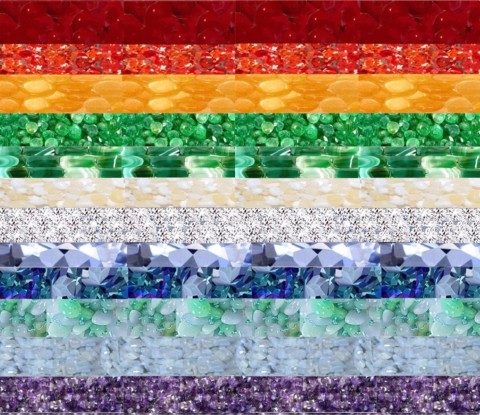 The city was laid out like a square, as long as it was wide. He measured the city with the rod and found it to be 12,000 stadia in length, and as wide and high as it is long. He measure its wall and it was 144 cubits thick by man's measurement, which the angel was using.

The wall was made of jasper, and the city of pure gold, as pure as glass, The foundations of the city walls were decorated with every kind of precious stone. The first foundation was jasper, the second sapphire, the third chalcedony, the fourth emerald, the fifth sardonyx, the sixth carnelian, the seventh chrysolite, the eighth beryl, the ninth topaz, the tenth chrysoprase, the eleventh jacinth, and the twelfth amethyst. The twelve gates were twelve pearls, each gate made of a single pearl. The great street of the city was of pure gold, like transparent glass.

The birthstone lists that are used today are believed to have their origins in the stones of the High Priest's Breastplate. The Book of Revelations, that contains the passage listing the Foundation Stones, was not held in high esteem at the onset of the modern era, but with passage of time its contents became more esteemed. With this, the listed stones became associated with the twelve Apostles, as the foundation of the Christian church, and then with the twelve months of the year which used to begin with March prior to the modern calendar. Therefore today's birthstone lists are more influenced by this list of Foundation Stones, than by the original list of the High Priest's Breastplate Stones.

EZEKIEL.28:12-19  Son of man, take up a lamentation upon the king of Tyrus, and say unto him, Thus saith the Lord GOD; Thou sealest up the sum, full of wisdom, and perfect in beauty. Thou hast been in Eden the garden of God; every precious stone [was] thy covering (embellishment), the sardius, topaz, and the diamond, the beryl, the onyx, and the jasper, the sapphire, the emerald, and the carbuncle, and gold: the workmanship of thy tabrets (tamborine) and of thy pipes ( a jewelers term for a socket or cavity) was prepared in thee in the day that thou wast created. Thou [art] the anointed cherub that covereth; and I have set thee [so]: thou wast upon the holy ; thou hast walked up and down in the midst of the stones of fire. Thou [wast] perfect in thy ways from the day that thou wast created, till iniquity was found in thee. By the multitude of thy merchandise they have filled the midst of thee with violence, and thou hast sinned: therefore I will cast thee as profane out of the mountain of God: and I will destroy thee, O covering cherub, from the midst of the stones of fire. Thine heart was lifted up because of thy beauty, thou hast corrupted thy wisdom by reason of thy brightness: I will cast thee to the ground, I will lay thee before kings, that they may behold thee. Thou hast defiled thy sanctuaries by the multitude of thine iniquities, by the iniquity of thy traffick; therefore will I bring forth a fire from the midst of thee, it shall devour thee, and I will bring thee to ashes upon the earth in the sight of all them that behold thee. All they that know thee among the people shall be astonished at thee: thou shalt be a terror, and never [shalt] thou [be] any more.

The covering of Lucifer

to·paz ( t˝“p˛z”) n. 1. a. A colorless, blue, yellow, brown, or pink aluminum silicate mineral, often found in association with granitic rocks and valued as a gemstone, especially in the brown and pink varieties. b. Any of various yellow gemstones, especially a yellow variety of sapphire or corundum. 2. A light yellow variety of quartz.

di·a·mond ( dş“…-m…nd, d ş“m…nd) n. 1. An extremely hard, highly refractive crystalline form of carbon that is usually colorless and is used as a gemstone and in abrasives, cutting tools, and other applications. 2. A figure with four equal sides forming two inner obtuse angles and two inner acute angles; a rhombus or lozenge.

on·yx ( Ľn“ąks) n. 1. A chalcedony that occurs in bands of different colors and is used as a gemstone, especially in cameos and intaglios. [Middle English onix from Old French from Latin onyx from Greek onux nail, onyx; See nogh-  in Indo-European Roots.]

sap·phire ( s˛f“şr”) n. 1. A clear, hard variety of corundum used as a gemstone that is usually blue but may be any color except red. 2. A corundum gem. 3. Color The blue color of a gem sapphire. adj. 1. Made of or resembling a gem sapphire. 2. Color Having the color of a blue sapphire.

car·bun·cle ( kär“bľng”k…l) n. 1. A painful localized bacterial infection of the skin and subcutaneous tissue that usually has several openings through which pus is discharged. 2. a. A deep-red garnet, unfaceted and convex. b. Obsolete A red precious stone.

Third Row that was left off of Lucifer's breastplate. Notice the third row. Three is perfection, and is also the number of God.

The 7th Stone)  lig·ure ( ląg“y‹r”) n. 1. A precious stone of ancient . legure or leshem. In Hebrew it is a word that is foreign to Hebrew and was picked up by Moses and used in the language. In our modern translation we would call it Jacinth or Zircon Theophrastus, a writer around 372 to 287 BC describes this as “a stone for engraving seals: and has an attractive power like amber.”  ( It has been used as the point of seal engravers and is difficult to polish) The jacinth being amber in color and it’s color of amber, as Thephrastus pointed out has an attractive power like amber. It has the electric attractiveness of amber. It was often used for seals.

The 8th Stone) Agate ag·ate ( ˛g“ąt) n. 1. A fine-grained, fibrous variety of chalcedony with colored bands or irregular clouding. = shbuw or Shebo, Again the Hebrew word is shebho which is a foreign word to the Hebrew language which was adopted into the language by Moses. It is a variety of chalcedony. It is a beautiful stone with bands of color running through it.  There are many legends that surround the agate because it was among the first stones to be considered precious among man. According to legend the agate had a quality about it which made the wearer more agreeable and persuasive and gave him favor with God. It also gave him strength and helped him to rest. The people of summeria used agates for axe heads, one of which is in the american Museum of natural history in NY city. It is a red stone with bands of white and black running through it.

The 9th Stone) Amethyst am·e·thyst ( ˛m“…-thąst) n. 1. A purple or violet form of transparent quartz used as a gemstone. 2. A purple variety of corundum used as a gemstone. 3. Color A moderate purple to grayish reddish purple. [Middle English amatist from Old French from Latin amethystus from Greek amethustos a- not; See a-1 *methustos intoxicated( from methuskein to intoxicate) (from methuein to be drunk (from the belief that it was a remedy for drunkenness)) (from methu wine) or achlamah, the word amethystos means not drunken. It is purple in color. The historian Pliny said the Greeks called it Methystos because it resembles the grape. The legends pertaining to this stone were that those who wore it thought it quickened the intelligence of the wearer, and protect him from disease and harm because the last part of the Hebrew word Achlamah is chalam which means to be healthy and strong or restore to health.

Therefore we can see that Satan is void of revelation, rest and relaxation because he has rejected mercy, and therefore without revelation and without rest he has nothing to do whatsoever with the 7th seal.

Meaning of The Stones

How to make Rainbow Bracelets and Necklaces

MORE LINKS:
Precious Stones of the bible.com is another great resource in understanding the stones. CLICK HERE for meanings of the colors that is found on their website.

Gem Jewel.com has lots of interesting facts on stones

Covering of Lucifer from Message Doctrine

What's In A Stone? by Julie Potter

History of Precious Stones in the Bible